As dearymusic, we also love discovering music (art) organizations as well as local bands. And Spectrum Music is one of the music organizations that we certainly dearly appreciate the effort on their projects to assemble the best composers of our favourite city TO. They are basically a group of Canadian composers (“Managing Artistic Director” Ben Dietschi, “Director of Production” Shannon Graham, “Artistic Producers” Matt Roberts, Jesse Dietschi, Heather Segger, Chelsea McBride, Graham Campbell, “Education Programs Manager”  Daniel Jamieson) who create and present a contemporary hybrid of jazz and classical music. They strive to create innovative, genre-defying themed concerts which explore intersections between subcultures in Canada.

Not so long ago, back in last winter when they were promoting their “Your Wish is Our Concert” project we heard about their work and we were curious to discover how they aim to reach out to their audience. The project itself is quite interactive. For instance “Your Wish is Our concert” concept was basically based on audiences’ ideas which could be converted to compositions. They asked audience to submit their ideas and let the online community vote for the best. At the end of voting period, a short list of ideas were created to and those were chosen to be composed for the show.

So to speak, I tried my chance on “Northern Lights” and it was on the shortlist for the show. There were many other great ideas that composed by wonderful local musicians. We were so curious and excited to hear how Northern Lights would sound for Kyle Brenders, one of the composers of Spectrum music, who was selected to compose my idea. So we went to the show and also shot a short video clip of Kyle Brender’s piece on Northern Lights and couple more videos of the show which you can find below the page.

Even though we couldn’t reach to Kyle Brenders, we had the opportunity to have a quick chat with its Managing Artistic Director, Ben Dietsch.

Oh AND we have a “little” surprise for you on this interview of us. Just read it through.

Here is the interview! And more.

How did you come up with the idea of Spectrum Music

I created Spectrum in 2010 to provide a voice for a unique style of music that was happening around Toronto that weaves improvisatory elements together with sounds from both the jazz and classical worlds. I studied with bassist/cellist/composer Andrew Downing during my grad degree at U of T, and he turned me onto this particular aesthetic: blending elements of jazz and improvised music with the instrumentation and long-form compositions typically found in classical music.

So at the core, my initial artistic motivation for Spectrum really stemmed from this idea: that the future of jazz music lies in its synthesis with other genres, and that jazz improvisers can be a conduit for the great emotional power that comes from expressing a particular moment in time.

I believe that improvisation and composition coexist in a continuum, and all music contains qualities of both. Improvisation is in its most elegant form in the moment it is performed. From that moment on, it’s relevance diminishes as the moment of creation can never be revisited. Composition is in its most elegant form in stasis, on the page. During performance, this boundless potentiality diminishes as any interpretation is just one of many possible iterations. With Spectrum, we’re trying to have the best of both worlds! 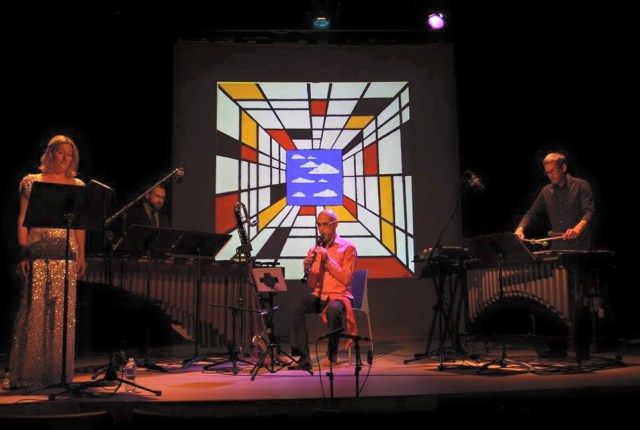 I did a year-long study project with composer Gary Kulesha in 2011 (Composer Advisor at the TSO) which produced a series of works in this vein. I wanted a platform to share those pieces with the public, and there wasn’t any company dedicated to chamber jazz in Toronto. Necessity is the mother of invention, and thus the very first Spectrum concert was born! I assembled some of the most accomplished and inspiring figures working in chamber jazz in Toronto: Andrew Downing, David Occhipinti, Patrick Reid, Caitlin Smith, among others and presented on “Stories Without Words” in the Fall of 2011. They were fantastic collaborators, some of which stayed on for several years as the company grew. Meet the faces behind Spectrum on our website.

3) How many musicians does Spectrum Music work with?

The relentless creativity and passion from our team of artistic producers allows Spectrum to be very prolific for its size. In a typical season we engage about 20 artists and present roughly 15 brand new works. Since it’s inception, we’ve put over 60 artists on stage in 16 full concert programs featuring over 50 genre-bending new Canadian compositions. Our artistic producers are also exemplary artists themselves, active in all sorts of projects around town.

How did you come up with the idea of Your Wish Is Our Concert project? It is a very unique idea indeed.

Art for art’s sake is important, and I respect it…but that’s not what Spectrum is about. We believe that music is a lens, a kaleidoscope through which we can better understand the world around us, our lives, and each other. So, all of our concerts are about a theme; something out there in the world which has nothing to do with music. We’ve used music to explore the cosmos, ancient art, and fairy tales, and even hipsters and internet memes. We want our audiences to join us on a journey, one that we take together, and one that leaves us slightly changed when we go home.

In other words, there is an element of outreach in all of the art that we create. I feel it’s our responsibility as artists to reach out and offer something of value to the public. My idea for “Your Wish Is Our Concert”, was to take this philosophy to the maximum. I thought what better way to instill a sense of ownership of what’s unfolding on the stage than turning over thematic control to our audience. I wanted to show people that music can be a medium of discourse for everyone, to explore things that they actually care about in the world. Public response was great and we ended up with an incredible set of themes to work with!

4) Does Spectrum Music has any future plans on any other concepts? How many shows have been scheduled so far?

Spectrum turns 5 next year! We’re putting the finishing touches on a very exciting four concerts, and we can’t wait to tell you about them. It’s a secret for now, but just because we love dearymusic readers here are a few hints:

“I think upon Mackenzie, David Thompson and the rest”

“The vapider the cliche, the sharper the canines of the real truth it covers.”

If you know what all three of these clues are referring to, email us the answers (dearymusicto@gmail.com) and you could win a pair of tickets to each of Spectrum Music’s shows next season!